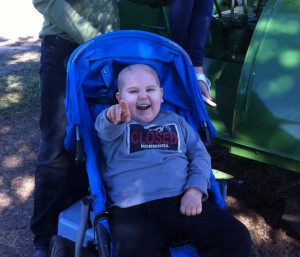 In July 2009, as Cooper was about to celebrate his 2nd birthday, his parents found him occasionally complaining that his neck hurt after running, jumping or typical toddler play. Each time, with rest, his neck pain would subside and off he would go again! After many visits to the pediatrician and a number of specialists, an MRI in August 2009 found a tumor the size of a golf ball at the base of Cooper’s brain. A day later, Cooper was admitted to Duke University Medical Center, where he would undergo a 12-hour surgery to remove this tumor. And that’s just the beginning of Super Cooper’s journey. Since Cooper’s initial diagnosis, he courageously endured:

Cooper lost his battle on January 19, 2014, but his life continues to inspire us. Our memory will always be of  his infectious laugh, love of music, desire to play even through the pain and fatigue and the courage that came shining through as he asked his healthcare providers before a procedure, “How are you today?” His smiles and hugs he gave in the face of so many obstacles will be forever in our hearts.
Cooper’s memory lives on through Super Cooper’s Little Red Wagon Foundation, which was launched soon after Cooper’s diagnosis by the Herman family.

Stay on top of news and events, follow our social media:

Please help us continue our work by donating today.